﻿Notch signaling plays essential roles in cardiovascular development, and its impairment causes human cardiovascular diseases such as Alagille syndrome and CADASIL. Following the binding of a ligand, the intracellular domain of Notch receptor forms a transcriptional activation complex with the RBPJ DNA-binding protein. We and others previously identified the Hey family of bHLH transcription factors as transcriptional targets of Notch signaling in the developing cardiovascular system. Among three family genes, the expression of Hey1 and Hey2 is also enhanced by ALK1 receptor signaling in endothelial cells. Embryos null for Hey1 or Hey2 do not show abnormalities of early vascular formation, but their combined loss causes embryonic lethality due to vascular demise similar to that observed in Notch and ALK1 signal deficient embryos. Additionally, Hey1 null mice display specific defects of the fourth pharyngeal arch artery at late embryonic stages, resulting in great vessel anomalies such as the interruption of the aortic arch. Such defects are in a sharp contrast to the Hey2 null phenotypes (ventricular septal defect, tricuspid atresia and right ventricle hypoplasia) in cardiac morphogenesis. Endothelial-specific deletion of Hey1 and Hey2 leads to abnormal vascular morphogenesis virtually identical to the global double knockout phenotypes, and great vessel malformation by the Hey1 deficiency is also reproduced by endothelial Hey1 deletion; while the Hey2 function in myocytes is essential for normal cardiac development. Embryonic expression of Hey1 and Hey2 in the vasculature and heart is maintained through a combination of tissue-specific enhancers regulated by Notch and other signaling pathways. Collectively, the members of the Hey transcription factor family play unique as well as overlapping roles in cardiovascular development. 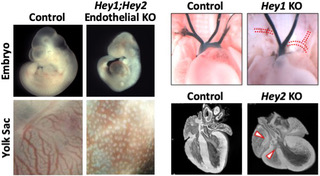 Log in to make the most of the service, such as My Schedule.