The prize has been established by the European COST Action MP1208 “Developing the physics and the scientific community for Inertial Confinement Fusion” in 2014 to commemorate one of the founders of the directly-driven Inertial Confinement Fusion for Energy studies in Europe. It is rewarding active researchers at mid-career (within 15 years of the doctoral degree) working on ICF-related topics.

The 5thEdouard Fabre prize will be awarded at the 11thedition of this conference, to be held in Osaka (Japan – 23-27 September 2019). 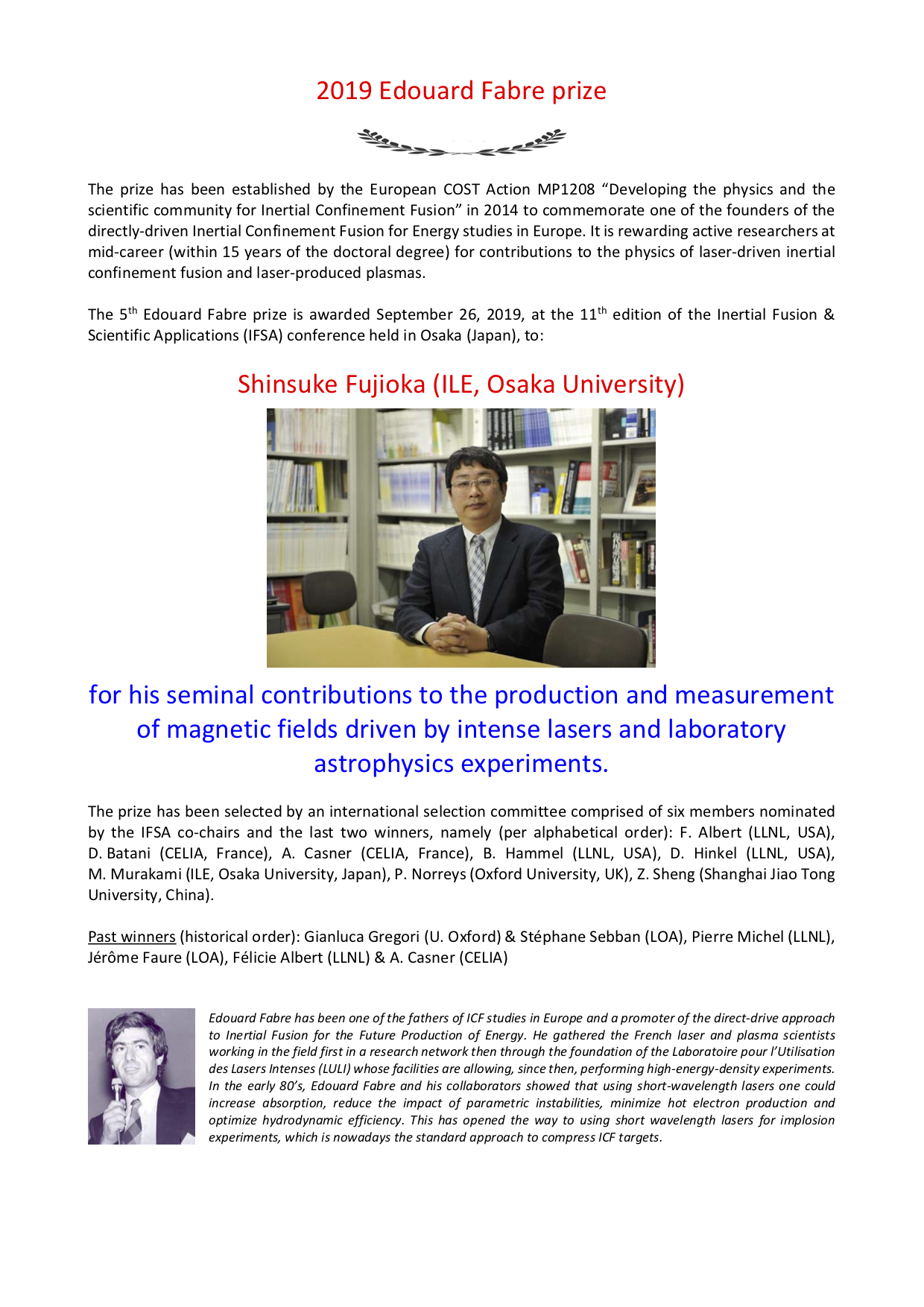 The prize was chosen by an international selection committee comprised of 6 members nominated by the IFSA co-chairs (2 from Europe, 2 from Asia and 2 from America) and the last 2 winners.
The committee members are not eligible for the prize.

A CV, a list of publications and a letter of application shall be sent to the email address:
ifsa2019_fabre@meslistes.polytechnique.fr
Self-nominations are accepted and support letters are not required. The winner will receive a certificate and a cash prize of 1500 €.  He will also be offered a lecture at the IFSA2019 conference.

Edouard Fabre has been one of the fathers of ICF studies in Europe, and a promoter of the direct-drive approach to Inertial Fusion for the Future Production of Energy. He began to work on CO2 and ruby laser, later moving to Nd:glass. In the 70's he gathered the French laser and plasma scientists to work on ICF and related physics in a research group (GRECO), which was on the basis of future developments in the fields. In 1988 he founded LULI (Laboratoire pour l’Utilisation des Lasers Intenses), which has played a leading role in Europe in civilian academic research in ICF and HED science. The 6-beam laser facility at LULI allowed performing academic implosion experiments all over the 80’s. At the beginning of the decade, he and his collaborators showed that using short-wavelength lasers one could increase absorption, reduce the impact of parametric instabilities, minimize hot electron production and optimize hydrodynamic efficiency. This has opened the way to using short wavelength lasers for implosion experiments, which is nowadays the standard approach to compressing ICF targets.

Log in to make the most of the service, such as My Schedule.